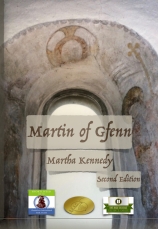 In Martha Kennedy’s quiet, intensely moving novel Martin of Gfenn, the title character is given at a young age by his father to the Augustine Canons of St. Martin in thirteenth-century Zurich. The boy quickly demonstrates a talent for art, which the Augustinians encourage with formal training. At the threshold of his adult life, Martin contracts one of the scourges of the Middle Ages, leprosy (the disease is described with a rhetoric that borders on the poetic and a degree of detail that’s almost clinical), but he initially believes it will remain in remission. He achieves some public success as a painter in the following years, but eventually his symptoms return and accelerate; his life is derailed and he ends up at the Knights of St. Lazarus sanctuary in the village of Gfenn.

Kennedy invests this grim story with a great deal of pathos and a surprising amount of resigned optimism; her characters are richly textured, none more so than Martin himself, who gropes toward self-knowledge and a kind of acceptance even as his nightmarishly worsening physical condition makes it harder and harder for him to exercise his artistic talent. The research behind Martin of Gfenn, both sociological and biological, is evident, but the novel’s true genius lies in its insight into the fragile nature of hope itself. 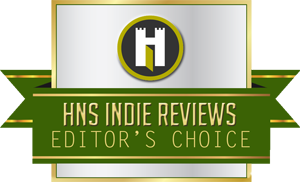 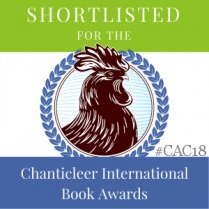 Martin of Gfenn is the story of a young artist named Martin living in Zürich, Switzerland, in the mid-thirteenth century. Left by his father (a minor knight) with the Augustine Canons of St. Martin, Martin shows promise as an artist at a very young age. The Provost finds a teacher for Martin in the person of Michele, an Augustine Canon and artist from Verona, who has been sent to Zürich as punishment and penance. Michele teaches Martin everything about fresco painting, infusing him with his own passion for drawing, color and the plaster itself. After a few years, Michele is called back to Verona.

At nineteen, primed to begin his life as a master painter, Martin contracts leprosy. He is given the rite of separation and sent away from the Augustine Canons of St. Martin and told to go to the leper community of the Knights of St. Lazarus in the village of Gfenn, one day walk to the north. Unable to bear the thought of this, he goes in the other direction, to the city of Zürich. 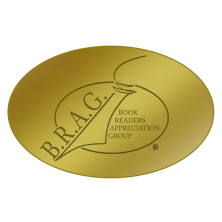 Though he could not have known it, it is only when he accepts his condition that Martin can be who he really is. Believing it his destiny to paint a sanctuary, he undertakes the newly built chapel at the community of the Knights of St. Lazarus.

Before daylight, Martin reached a walled group of stone buildings on low hill. The name of the place, Gfenn, was nothing more than the word in common use for swamp. Following ecclesiastical and temporal law, the communities of the Knights of St. Lazarus, the Leper Knights, were built downwind from everything so that the lepers’ breath would be trapped in the marshes.

A lay sister wearing white and a brother dressed in black answered Martin’s knock. Over his robe, the brother wore a black smock with a white cross appliquéd to one shoulder. His face was gruesome beyond the power of Martin’s imagination, but he moved and spoke as if his nose were not corroded and blanched, as if lips covered his teeth.

“Come in, brother,” he said. “You are hurt,” he said looking down at Martin’s foot with its bloodstained dressings. “What happened?” The voice was kind, the solicitude genuine.

“Dogs,” said Martin, his eyes down.

“On the mountain. Hunters’ dogs.”

“Let me see,” he said, leading Martin inside to a large room with a huge fire over which hung kettles of boiling water. “Sit.” The brother pointed to a bench just inside the door. “Ah, you had a bad time there,” he said unwrapping the chewed foot and ankle. “It must hurt. You walked here?”

“The mountain. The Zürichberg. What month are we in?” he asked the man. “It was full spring when I, or nearly, when I…”

“I will get dressings for that foot. Brother Heinrich!” he called out to another who was passing the back door. “I need your strength.”

“How,” thought Martin, “can you help me to stand?” He carried an image of himself as he had been, powerful, broad and heavy. To lean on this wraith who seemed about to crumble into dust? He shook his head.

“I am not so weak as you might think. I wore full armor in battle, day after day, on horseback in the burning sun. Some power remains. And, I know what you are thinking,” he said, “but all you fear is written on your own person. Here. Let me help you.”

Martin reached for the stump, and then hesitated.

“Grab me, do not grab me, but if you do, I will help you stand, and if you stand and come with me, you will be able to bathe.” Brother Heinrich seemed to smile. “Looks like it’s been a while!” Martin took a deep breath and grasped the arm above the stump. Brother Heinrich half-lifted Martin to his feet, and led him to a closet built against the wall. Martin discovered he was weaker and in greater pain than he had realized. “Undress here. When you’re ready, I’ll help you into the water.”

Martin drew the ledger book from inside his clothing and undressed. His worn and dirty tunic had been ripped only at last in his tussle with the dogs. His body — except for the lesions — was exactly that of the thin youth sent from St. Martin’s.

“Cover yourself with this.” Brother Heinrich tossed a woolen blanket into the closet. Martin wrapped himself and dragged his aching leg some steps forward. “Take my arm. The bath will make you feel better. We bathe often here; it soothes our distress.” Brother Heinrich helped Martin into the tub. The hot water burned Martin’s ravaged foot, and he cried out. “That is a nasty bite. I am sure it hurts. I will leave you for a moment and get Brother Hugo.”

A voice behind him said, “Come on, my friend. Steady yourself. It will pass. You will soon forget all about it. None is unclean where all are unclean. Within a very few weeks you will no longer notice. You will feel better when you wash.” Martin closed his eyes while the man scrubbed the crust of forest from his back.

Swiss Press about Martin of Gfenn

To learn more about the novel and read more reviews, go to martinofgfenn.com

To buy this book on Amazon, Martin of Gfenn

Martha Kennedy is a writer and a painter, though as a painter she uses her full name, Martha Ann Kennedy. You can learn all about her work on her blogs. She lives in a small town in the remote San Luis Valley of Colorado. For more than 30 years she taught writing at the college and university level in the San Diego area. She is a Colorado native. View more posts